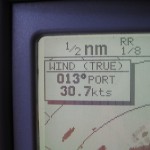 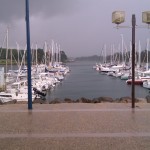 it rained more than just buckets

But did we care? No- because we were in Loctudy

Take a closer look a this photo panorama, taken from the back of Filibuster and looking across to Isle Tudy later that day.

The 2 French yachts on the left allow me to make a gross generalisation about French sailors:

French sailors like to commune with nature, to sail right at the forefront of their boats capability. And they are good at it too. Both the aforementioned boats had sailed through horrendous conditions: monsoon strength rain with 30+knot winds.

You will notice that they have no sprayhoods or dodgers and get whatever Mother Nature throws at them in the face. I suspect that Mother Nature, who is French in these parts, takes their principal of communing with her and gives it a Gallic shrug.

Anyway, enough of digressing, I’ve said it and got that off my chest.

Why we love Loctudy

To start it’s a nice place to arrive: greeted by the chequerboard tower of Perdrix on  the way in and straight into a berth view a view. 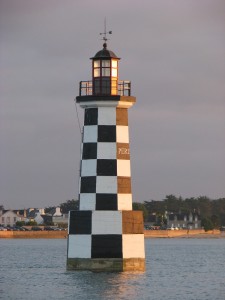 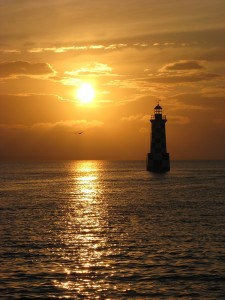 Loctudy’s marina is another small communal boat parking place with friendly staff who generally come out to meet, greet and place you.

But perhaps the real reason is the seafood from the adjacent fishing port:

All in a couple of hours. The langoustines were still fighting back before we cooked them…

And another thing is the price: a demi kilo of best langoustines and and 7 bottles of fine Muscadet sur Lie (one cold for drinking the others destined for the UK) came to just over £40 from Viviers de Loctudy. 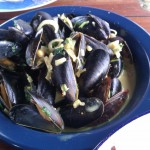 The following night was moules mouclade, (light creamy curry sauce) cooked by Michele with the main ingredient costing under €3.

Add another bouteille of fine Muscadet (oops, that one isn’t going back to the UK) and you have a meal for two for under £6. 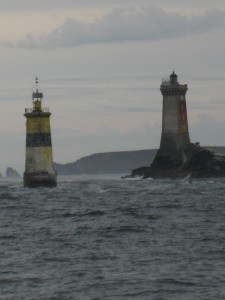 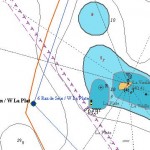 Panoramic view of the harbour front in Camaret sur Mer taken from Filibuster.

Camaret port side by moonlight

What’s not to like? moored in the right spot you get great views of the nearby harbour side all the way across to the distant commercial port.

Note no forest of masts and yet we were in a marina!.

A bit of history 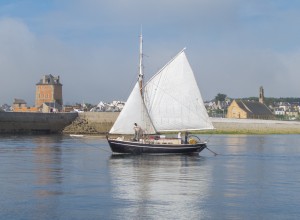 Camaret has a fascinating history. Vauban’s tower in the picture of the entrance was successfully (very successfully) used to defend the port against a large Anglo-Dutch invasion.

The port subsequently thrived as a fishing port until the economics of the industry dictated larger vessels and better transport connections that other ports could offer. Relics of the age of fishing remain on the beach as a reminder. 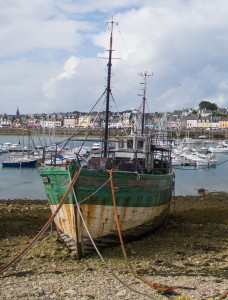 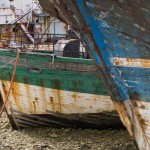 Perfectly situated in sheltered waters Camaret is often our first and last stop in France. It’s convenient for Brest (8 miles by boat) with it’s airport and scheduled flights to Southampton.

Excellent beaches make up the full complement for this little port.

As I said, what’s not to like about Camaret sur Mer?

Writing on 26th July in sunny Camaret it’s now time to recount a problem that occurred last Sunday and wasn’t very funny at the time.

Andrew’s friends on Bryher, Martin and Fi,  had invited us to a seafood lunch using ingredients caught in their own pots. And to celebrate the (almost) completion of building works we went across from our mooring in Filibusters tender, armed with a couple of bottles of bubbly.

It was going to be a fine afternoon with lovely food and great company overlooking Hell Bay. We arrived ashore and tied the dinghy well up onto the slip as per photo. 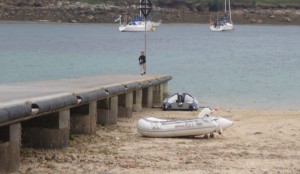 It was indeed a fine afternoon with lovely food and great company overlooking Hell Bay. Replete we wandered back to the slip. The tide was at the top of springs.

Surely not, in one of the finest cruising spots, could someone have stolen it?

No evidence either of coming loose and floating off downwind.

So we asked around and someone in the nearby shop remarked that they had indeed seen a dinghy under the slip. Tim got a lift on a local boat and looked long the line of the slip:

…..he saw the transom peeking out from under the slip…..

The rising tide coupled with gentle breeze has lifted the dinghy under the slip where it became stuck and subsequently submerged under the rising tide. This particular slip as you can see in the photo is supported on cylindrical pillars and otherwise open underneath.

Our plight had been noticed by the fantastic people at Bryher Boat Services and they loaned us a dinghy to get out to Filibuster for a period of contemplating the tide and donning swimming gear.

We waited for the tide to drop low enough to a) wade out and then b) extract the dinghy.

Well, to cut long story short we recovered the dinghy back to Filibuster for treatment. The final result was a 100% operational tender.

How to get a submerged engine going

read on if you want to know how to fix a dinghy engine that has been under the water for several hours:

If you have a good engine (Johnson 3.5 2 stroke in our case) you will be reward by it coughing into life.

Give it a good run. We found going to the pub was just about right….

We made it to Camaret sur Mer yesterday (23 July) after a long motor from St Agnes in the Scillies…..

Our route took us through Chanel De Helle / Chanel du Four: the pilot guide says something like this about the area:

Well, after a flat calm night we arrived at the entrance to “Hell Chanel” and no sooner had we committed ourselves when a thick fog rolled in: 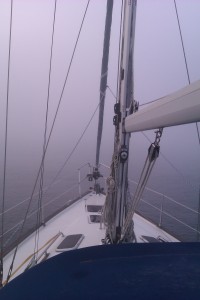 Visibility dropped to 50-100 yards. Tide ran at around 5kn. dangerous rocks were all around. Unseen vessels were heard to pass near by.

It would  have been the nightmare scenario just a few years ago.

Having the right kit and team 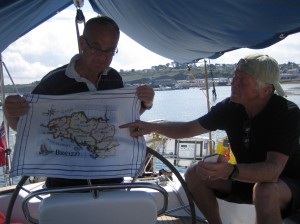 Our helm (Andrew Wiltshire) expertly guided by the navigator (Tim Greathead) got us to our destination safe and sound. 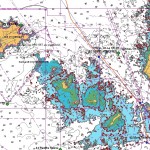 We amused ourselves by watching passing ships on the radar and AIS and sometimes we just watched them on the radar….. 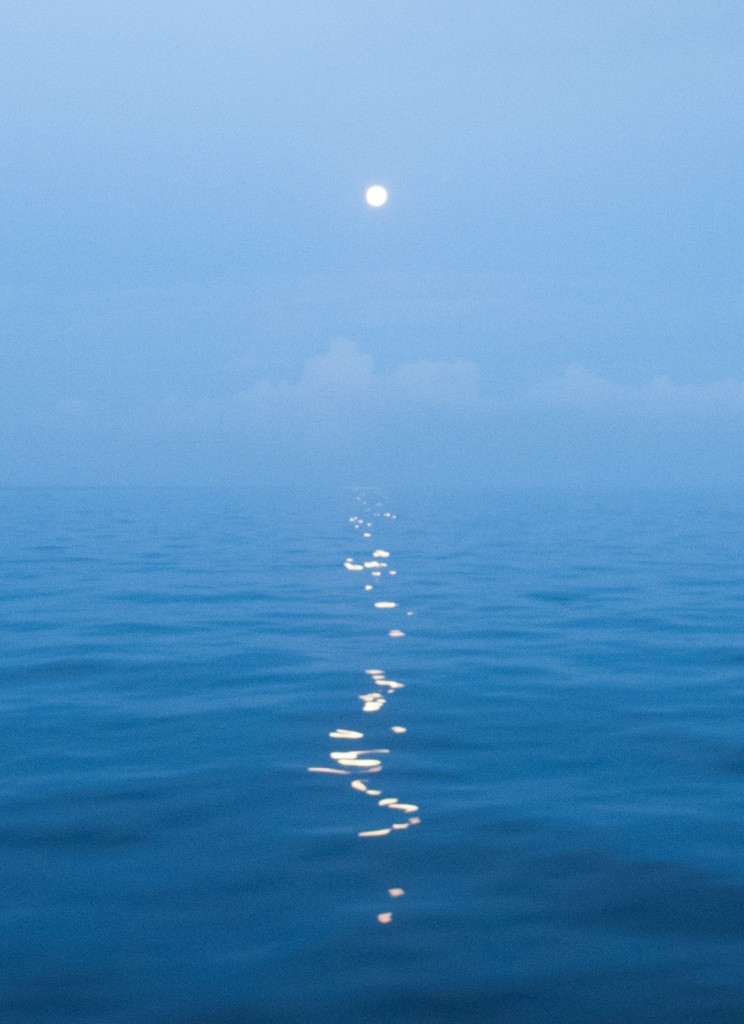 in fact we had to reduce speed a bit to ensure we arrived at the entrance to Chenal de la Helle in time for the favourable stream. 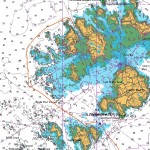 Rest of the passage. Shows tidal effect as we crossed. 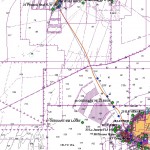 There’s not much to say about the passage from Lawrenny to Tresco in the Scillies. Quite often it can be a awful lumpy ride but this time we motored half and had a splendid sail for the remainder.

The wind forecast showed 25kn for the evening of arrival so we decided to seek a mooring in Tresco and were rewarded by a) the very last space and b) nearest the pub.

The passage is some 120nm and you can generally guarantee to be visited by dolphins. In this part of the world they seem friendlier than other parts and will sometime stay for an hour or more playing around the boat.

Andrew got a great photo that encapsulates fine weather and dolphins in a single shot. 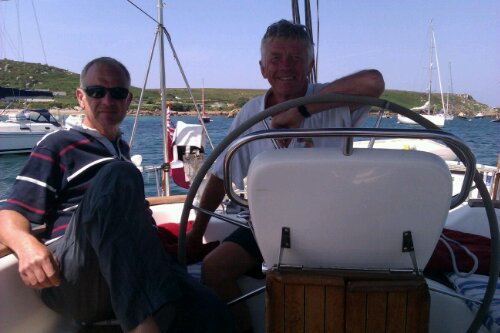 As so often the case with the Scillies, the weather can change quickly: here’s two shots taken looking North Saturday evening and the following morning. 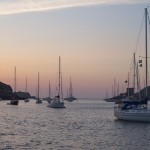 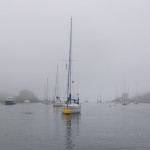 Hot before we go 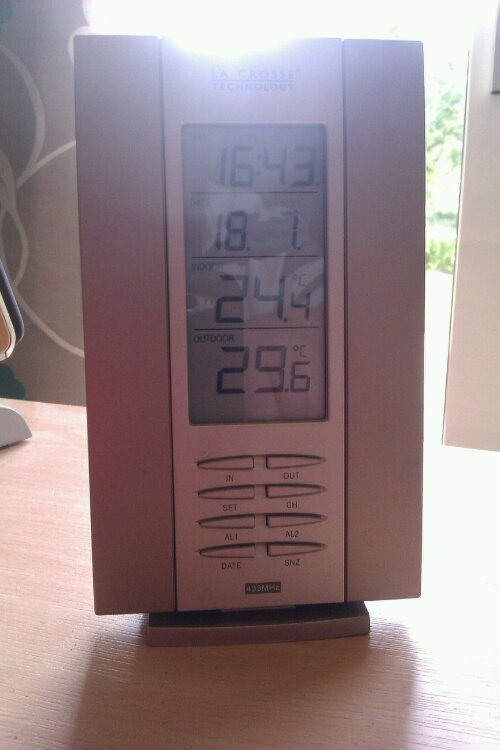 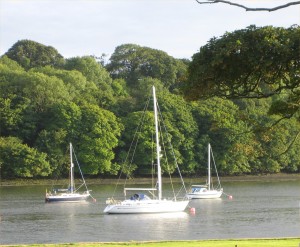 Filibuster – A Bavaria Ocean 40 on her home mooring in Lawrenny….

…next to some smaller yachts (now is that a big boat nearby and some other boats further away, or just a big boat?)