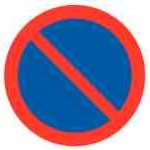 Writing from Port Joinville on Ile D’Yeu, its the 30th August. To mark bank holiday Sunday the weather has put on a typical show: a F5 thundery rainstorm just rattled through.

If there were one of those holiday type signposts here it would say 70 miles South East to La Rochelle, 280 North to Salisbury and 350 North West to Lawrenny.

Avid and not so avid readers will have already seen the sad episode regarding Forgetful Francois and the fate of Pierre the Peugeot.

Port Joinville, Ile D’Yeu is the next stop South from L’Herbaudiere,  One of our favourite places with its very sheltered (=quiet) marina, the fun attitude of the holidaymakers, the great bars for people watching around the the harbourside and so on.

What we didn’t know at the time of Francois is that he has a cousin on Ile D’Yeu. We’ll call him Gullible Guillame for the sake of alliterative allusion.

The harbourside in Port Joinville is a busy place, frequent ferries do what ferries do: namely disgorge then load up with holiday makers. The majority on foot for Ile D’Yeu is a place where cycling is very popular and bikes of all types can be hired around the port.

Around the ferry terminal it can get very busy, with people collecting and delivering holidaymakers. Parking is in short supply.

Guillame arrives in Jerry the Jeep

To drop off holidaymakers. No parking spaces immediately by the ferry terminal, but he sees his mate Antoine who waves him over.

Antoine tells Guilliame – don’t worry – I’ll park my car over there on the no parking zone and you can have my place here. I’m not staying long and there aren’t any no parking signs on your spot so you will be OK

Cars move. Antoine parks on the no parking zone. but then they decide to go off for a beer…or two….. 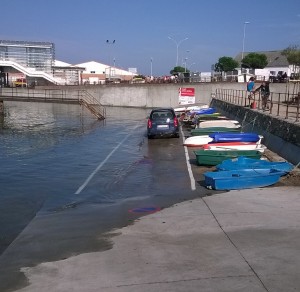 The No Parking Zone. Signs clearly visible. Under the surface. Can you guess what’s happened to Jerry the Jeep?

Yep, you guessed it. 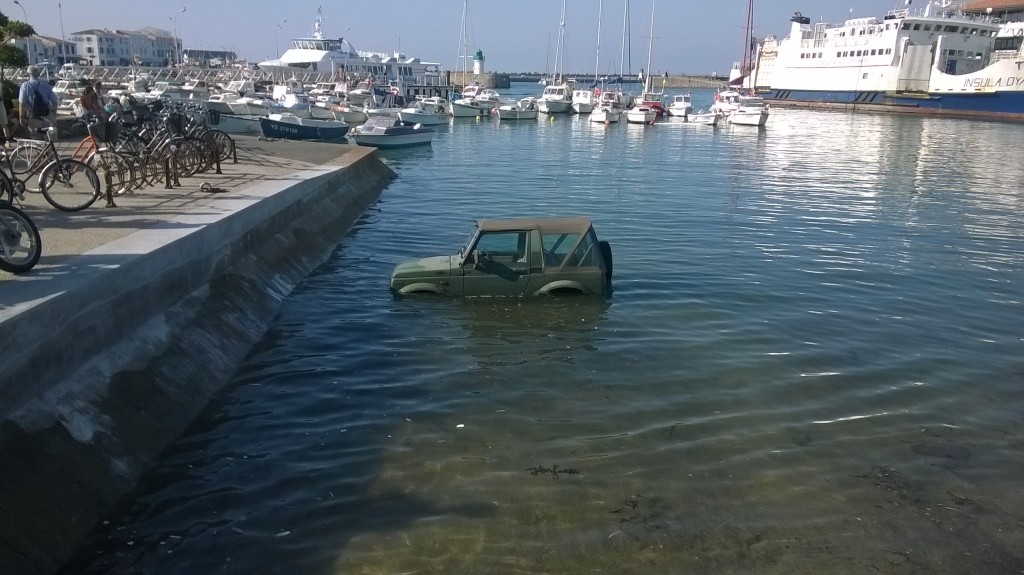 And some time later. Guillame had not come back, or was too embarrassed to show himself in front of the large crowd of holidaymakers taking photos. 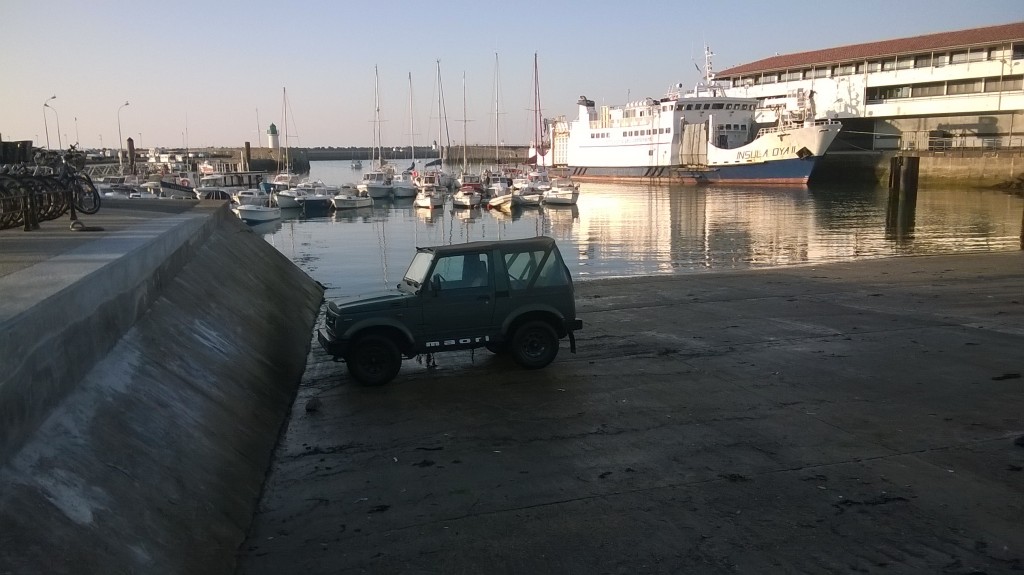 And Jerry the Jeep had disappeared by the following morning.

Holed up in Pornic

We’re in Pornic. (more about Pornic)

A storm is brewing.

We’ve known it was coming for a few days.

The forecast had it peaking at F9 or F8.

Right now the wind is mid teens in knots. Roughly on the bow. That’s OK. The bow points to a huge wall about 70m away. To our left is the entrance to the marina, a substantial pontoon is between us the outside.

A nice view in nicer times almost a year ago is here: 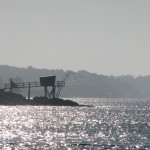 View from rear of boat

But tonight it’s not so nice.

This sort of trouble: 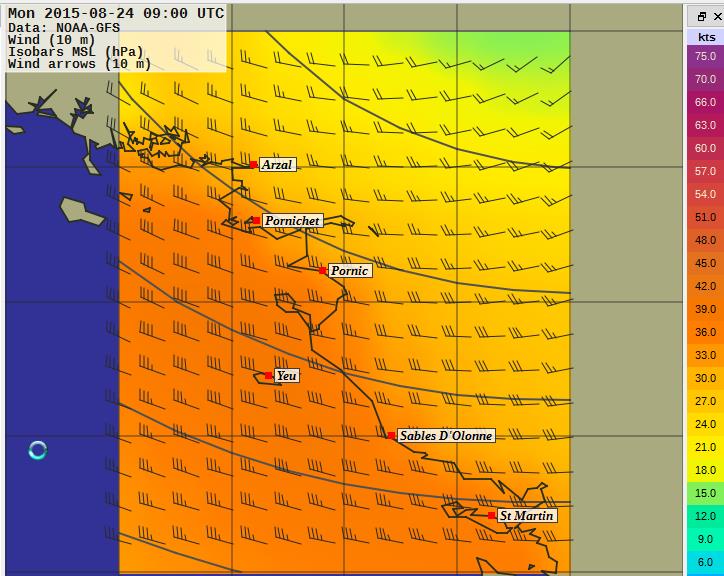 Orange is bad. Any wind speed beginning with 3 is not good. Things beginning with 4 are really bad.The forecast last night had something I’d never seen on this coast : beginning with a 5…..a different symbol appears because they’ve run out of toothbrushes.

Wind speed at 50kn+ is a Force 10. Officially not a Gale, nor a Strong Gale, but true sail ripping Storm.

So we’re holed up in Pornic. As I write the wind shrieks and howls around, the mooring lines creak and groan. it’s not nice out there. It’s not that nice in here either.

And it’s raining. Big time. Actually the sort of time where we feel smug that our full cockpit cover designed for Ireland and now working 100% in France, makes a lot of sense.

It peaked a bit later than expected – stretching through a unpleasant Sunday night into a downright nasty Monday morning.

A recording of windspeed shows the accuracy of the forecast.Over this 10 minute period the wind speed was mainly in the 30kn range, often above 40kn and on 5 occasions 50kn or more.

The wind had come around to the beam – side on.  the boat was heeled over against the pontoon and fenders with a nominal diameter of 30cm were squashed to 5cm thick.

The previously pleasant view became not so pleasant; 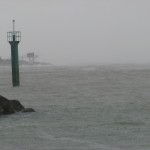 No one came in.

No one went out.

The storm blew all day.

A good day at the office?

If you have one, I’m sure it’s a nice dry place. But wouldn’t you be rather out and about in the fresh air on a Monday? Yes of course you would, who wouldn’t.

Now consider these pics of the waves breaking at the other end of the marina. There’s a test coming: 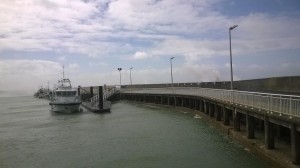 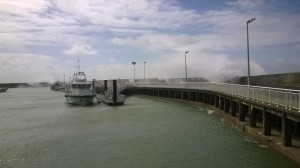 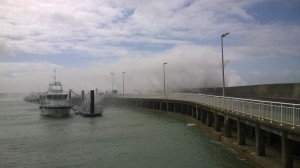 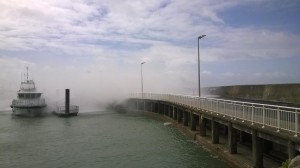 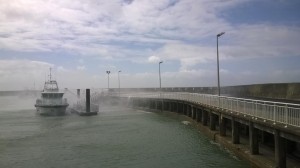 Did you spot the guys not having a good Monday? Click on the first pic: they are by the silver van and about to get what’s coming.

The weather didn’t improve much on Tuesday so we got on with all those exciting jobs that you do when stuck in port, like cleaning the cooker, cleaning the heads, writing blogs and so on 🙁

And finally – it looks like tomorrow there is a “window of opportunity” to push on to Ile D’Yeu. It’s not going to be that nice, but if we don’t take it then the next one isn’t until Friday, 2 more days hence.

We tried the window of opportunity. The wind blew It shut: a nice sail rapidly became a rough sail with 20+kn on the beam and rising. Boat speed 7-8kn with 2 reefs.

Prudence was heard saying “one accident and this could be dangerous” so we headed straight into L’Herbaudiere for 2 days (it rained most of the time) and we then motored all the way to Ile D’Yeu in zero wind ….you can’t win sometimes….

Back in Arzal ready for another session on Filibuster, heading down south to La Rochelle and environs.

On our travels we occasionally come across superb hotels that, were it not for our own floating accommodation, we might well stay at.

I’ve started a collection on the new Hotels for Liz page. Feel free to contribute further ideas that have a maritime connection.

Liz, to whom the page is dedicated, is not a boaty type and has asked me to comment on the en suite facilities to be found on Filibuster, in the hope of confirming a hotel bedroom will always be superior. 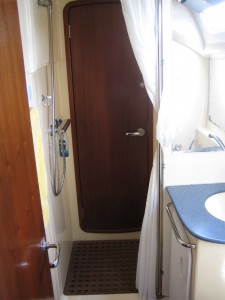 For a 40ft boat Filibuster is quite generous in the space allocated to most functions. Only sleeping 6 with single heads means there is more space for everything (compared to say a 40ft boat with 8 berths and 2 heads).

The heads consist of a generous shower area, hot & cold of course with thermostatic mixer. Measuring 4ft x 2ft 3″ door access at one end and shower curtain at the other. Nothing wrong there: I’ve certainly used smaller shower cubicles ashore.

In colder times, warm air can pumped in using the central heating system. 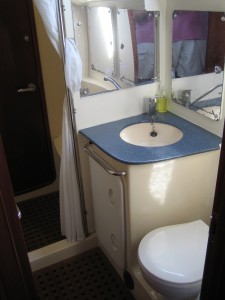 4ft x 3ft 4″ consisting of basin with mixer tap and the loo. Same curtain as in the shower area and another door rearward to the master cabin.

For landlubbers a word of explanation about the curious world of marine loos is in order.

They are a bit different to hotel loos.

The “deposit” part remains the same. Except when heeled over at 30 degrees under sail in a lumpy sea..

For males in particular it can be a game of true target practice: you are moving (in all 3 dimensions) …. likewise your target is moving, not always at the same rate, the challenge is to hit the centre. No wonder, contra to RNLI advice, so many men prefer to pee over the side. Downwind of course.

Unlike landside loos, boats do not have cisterns of fresh water to flush – but they do have a lot of water outside. 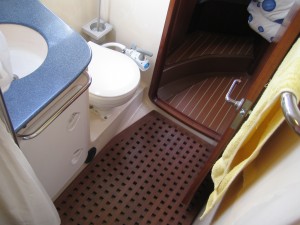 Business finished, this is the procedure:

On Filibuster all that pumping ends up in the “holding tank”. I need describe it no more. Opening its outlet valve at sea results in a distinctive & satisfying “whoosh” that confirms the process is complete.

Easy peasy. Wouldn’t put anyone off, would it?

Perhaps you are thinking of buying a boat? Perhaps you wonder why we ended up with Filibuster, a Bavaria Ocean 40?

This pic of the master cabin might help. It certainly helped to convince Michele. 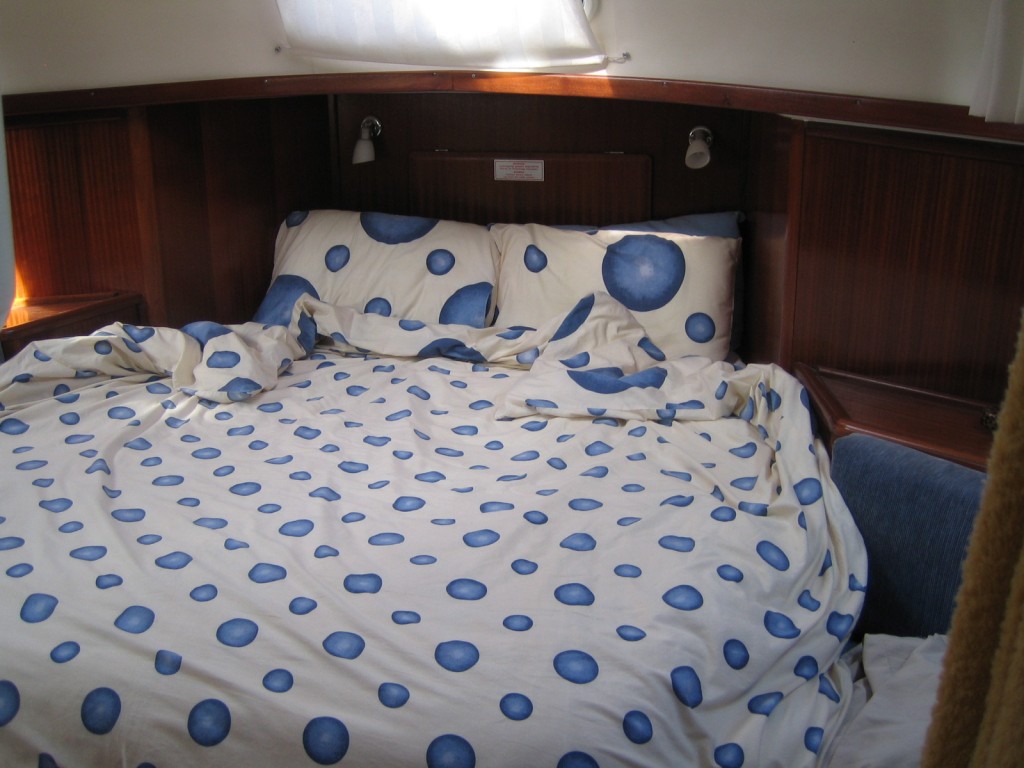