It’s not what it seems.

I finally publish this wrap up of Spain almost a year on (14 Aug 18): The journey back was demanding and we lost interest in blogging.

28 Aug 2017. We’re back in France. We speak the lingo, we know the supermarkets and we are in the comfortable but dull Les Minimes Mega Marina.

To cover the rest of N Spain from Ribadesella onward:

On St Vincente the pilot guide basically says don’t bother. We did bother and went in the hope of breaking up an otherwise very long haul to Santander. 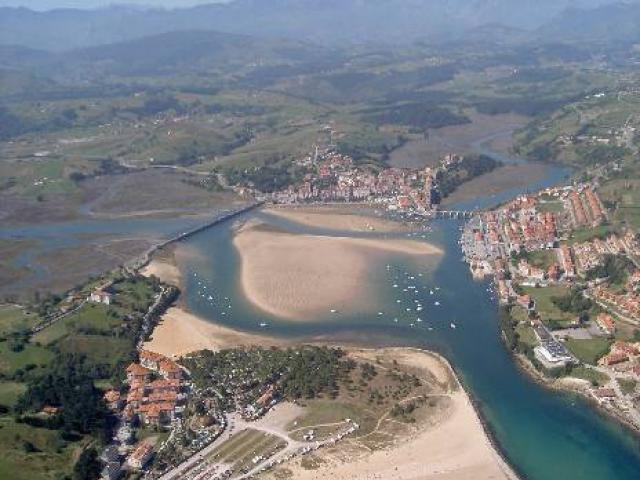 St Vincente de la Barquera. The only suitable anchorage for a 2m yacht is in the area to the right of centre.

The guide was right. There is only one place to anchor and it was already full. Press on, it’s going to be a long day.

So we arrive around midnight at Santander. Of the first marina the guide says “it will be fruitless hoping to charge in, hoping for the best” and is again right. At midnight there is a security guard armed with a whistle and he knows how to use it.

It’s more than his jobsworth to let you stay, even though there were spaces clearly available.

We met Timothy Spall and Shane 2 boats up taking their new boat down to the med.

A massive investment has created a large and empty marina. 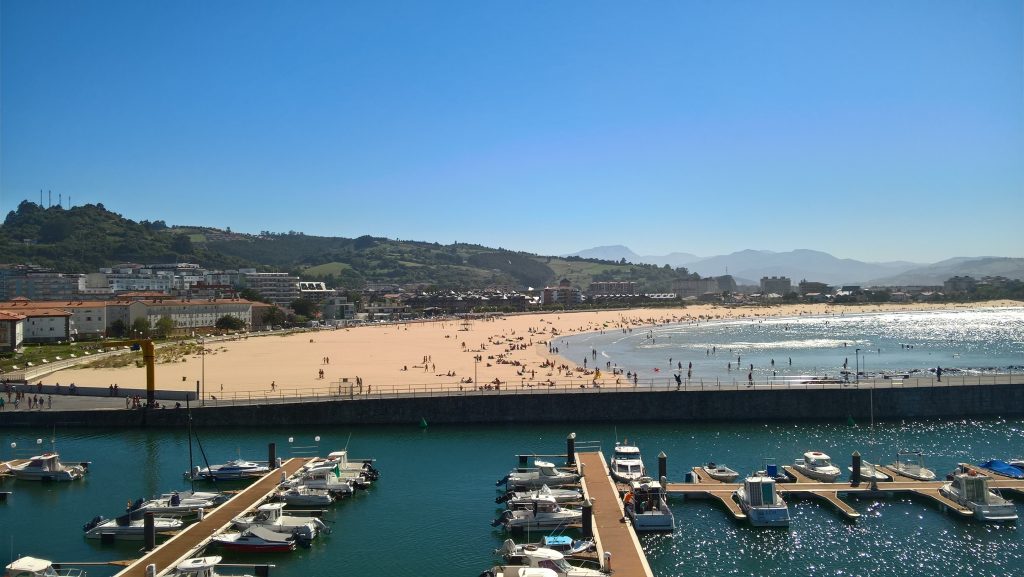 From the port office looking South 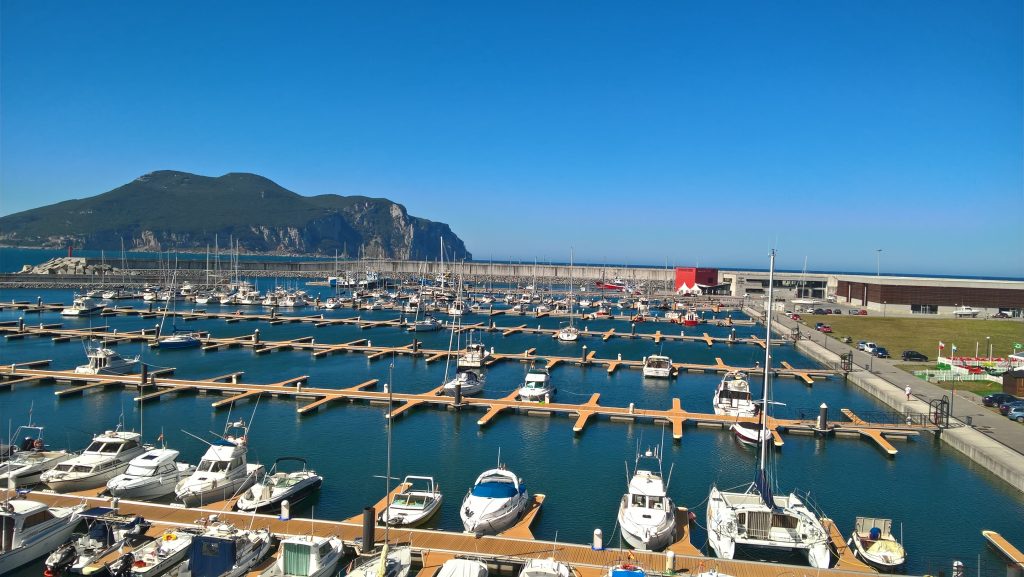 From the port office looking north. If you count out the pontoons we are on the furthest out (6th) on the left!

The journey here was wind on the nose for most of the way, reaching F6. A lively arrival aided by neighbours to get Filibuster secured.

A quick check of the forecast for Bilboa showed rain. Curious, from sunny Laredo that didn’t seem right, and our destination was less than 20nm away.

Until we got the spelling right….

Our chosen marina was full, so we ended up in the outrageously priced (€54 a night) Puerto Getxo. Taking advantage of the free laundry big time seemed to make things better. 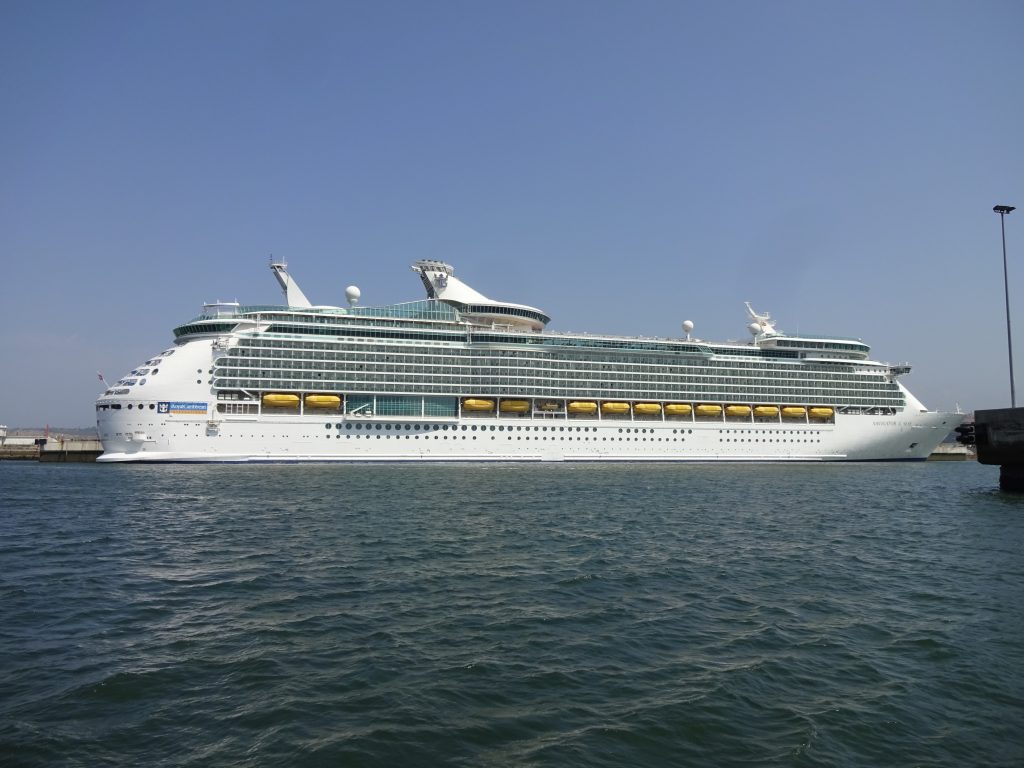 Navigator of the Seas by Royal Caribbean. It left after dark and it was impressive to see a whole town on the move. 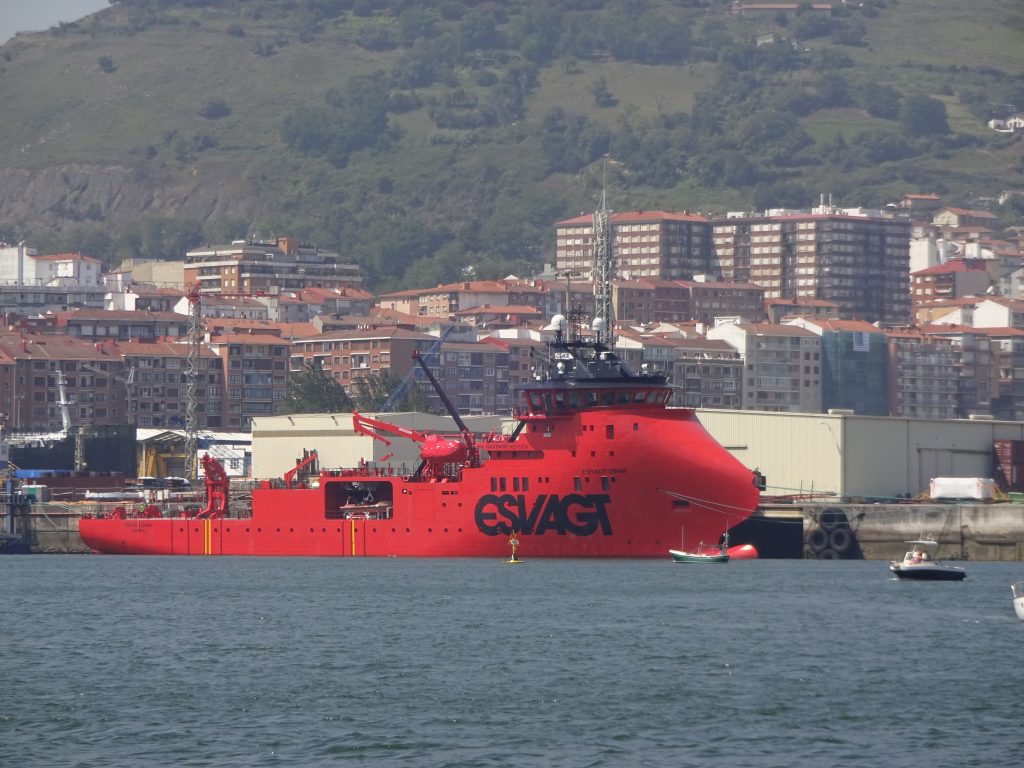 It don’t think its called Boaty McBoatface, but I could be wrong

It’s fair to say that after yet another non sail, we were beginning to wonder about Mojo and where it had gone to.

Things were not helped by the Bilbaon B***stard fly. Smaller than a mozzie we woke up before during and after the night being bitten to death. The resulting blisters were “angry”, itchy and bloody….grrr

We didn’t venture into the city….

Charming and pretty and very much Basque Country. Suddenly we are in another country. The language of which is so alien to Anglo/Spanish/French we can’t understand a word of it. 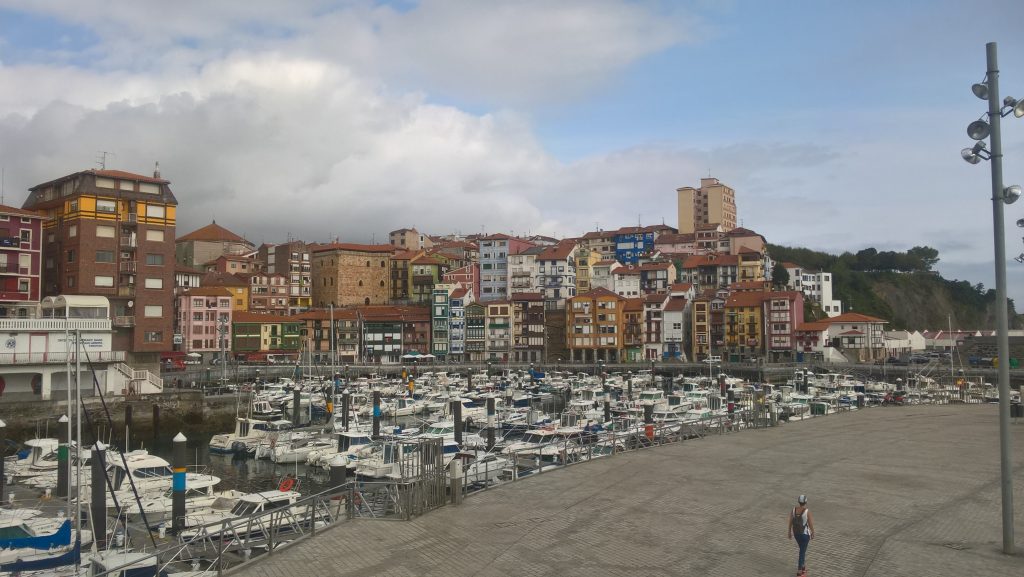 The old port and old harbour. 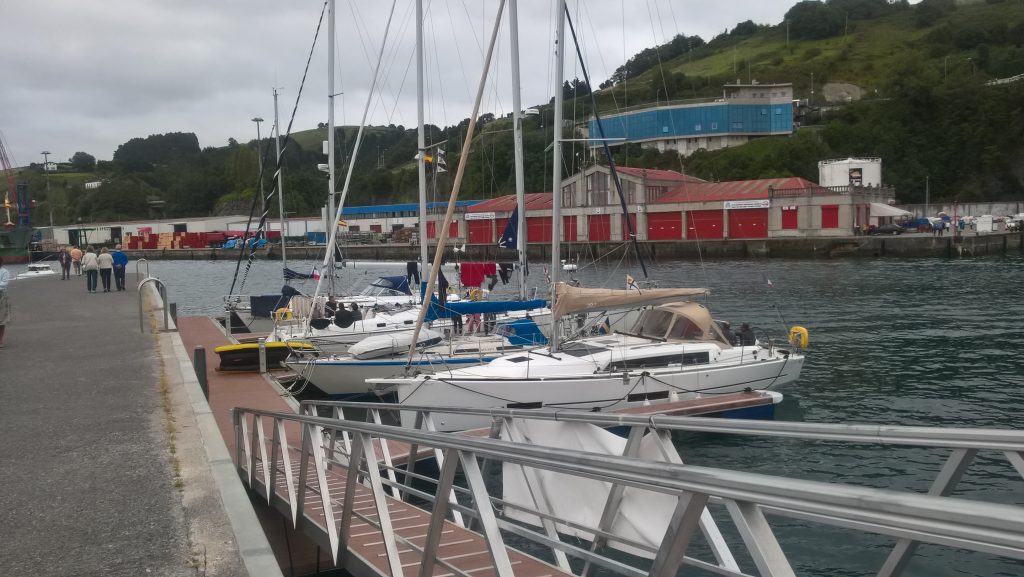 4 new finger berths for up to 8 visitors

So the new finger berths look OK, and are OK: water and electricity as normal.

The pilot guide is again out of date and has no mention of the above. Fortunately we have local knowledge from Jerry & Aggie.

And the things we should add to anyone coming this way are:

a) the locals are fishing fanatics

b) at all hours many of the boats in the first photo above head out to fish. Most at a speed that creates a significant wash. And they come back..

c) they all pass by your bow (or stern depending on which way you moored).

A recommendation is to moor stern in. We didn’t and our mojo took another knock that night.

And so farewell to Spain

In Bermeo we looked at the options. Option A was to carry on around the coast then head North along the French coast. Reaching the Gironde in around 10 days. Option B was to regard Bermeo as the closest point to the Gironde and go for it.

B won. We left aiming for Royan well after low tide. Motoring the whole way we got a bit too early for Royan and ended up across the way in peaceful Port Medoc.

Two days later we are in La Rochelle. Familiar places beckon and unless something interesting happens, this will probably be the last post. 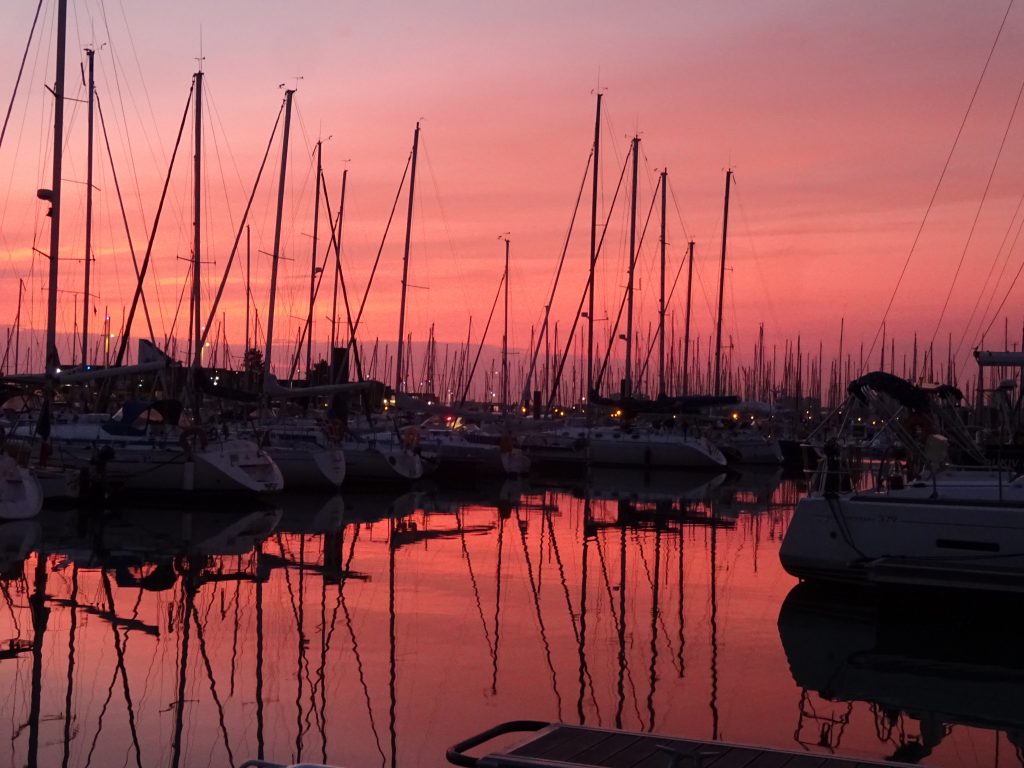 Les Minimes. Nice but dull. The end of the adventure 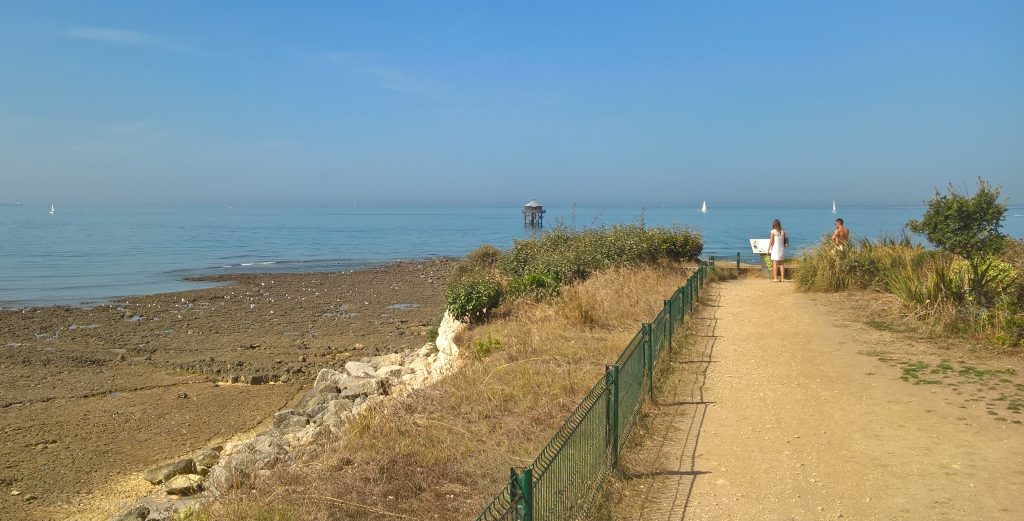 Back to normal. In Spain the bikes were hardly used as most supermarkets are close to the port. In La Rochelle this is the track coming back from the more distant Carrefour

The end of the adventure

By the time the boat is parked both of us will have covered more than 1000nm. Virtually all under motor.

Here’s a summary of what we liked and didn’t like in Spain.

Should you be following in our footsteps maybe it’s worth thinking about doing the trip the other way round to get more favourable winds and currents. However the traditional winds will nearly always be on your stern, again uncomfortable 🙁

And will we go back?

With all those pros of course we will. Perhaps not with Filibuster

I write this post from , Port Medoc in France. It’s Friday 25th August and the journey across Northern Spain has been hard work with little time spare to update the blog.

In  our need to move Eastward there have been many full days on the move with spare days consumed with maintenance, prepping for the next journey and the boring but essentials such as getting food, doing laundry etc etc.

We left home on our multi stage trip back to Filibuster in Muros: car, train, train, hotel, 4am start for Easyjet to Santiago, taxi, bus to Muros and on board 1230 in the afternoozzzz….

The reverse journey was via places already visited on the way down: Muxia, A Coruna, Cedeira and back to Viverio. No need for more on those suffice it to say the pic below was taken on the way into Viveiro and marked our only sailing. 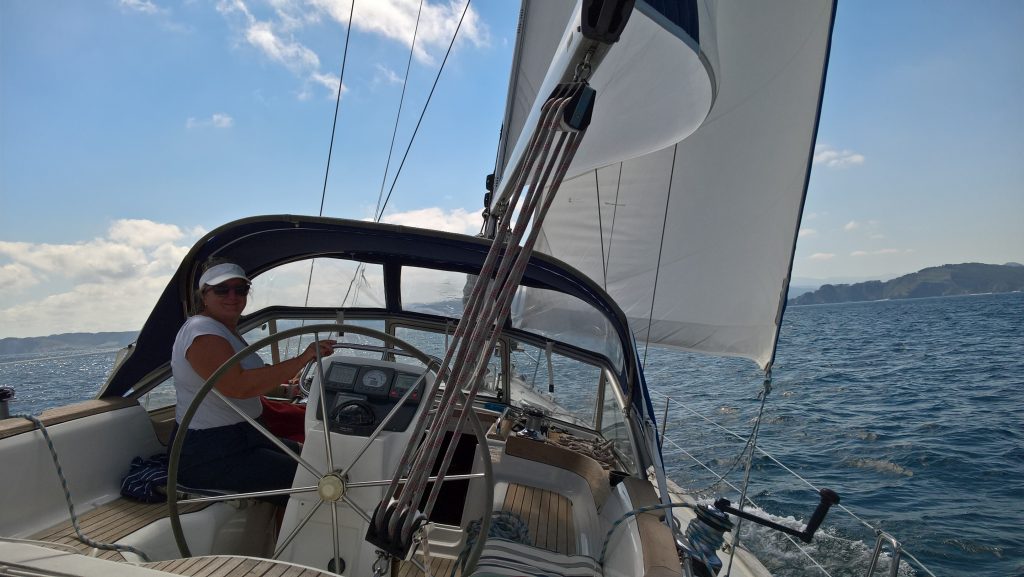 7kn boat speed in 11kn wind with sun. That’s how it should be.

In fact, many hundred miles further on (nearly 600nm from Muros) the above represents our only good sailing in 3 weeks.

From Viveiro: (all these places have some notes in the “we are in section”), and bearing in mind our need to make ground and push Eastwards at a pace.

Nice town, could have spent another day but the visitors berths are directly in the entrance to the marina and subject to a lot of  wash, from inside and out. Not pleasant.

Some stunning architecture in the town. 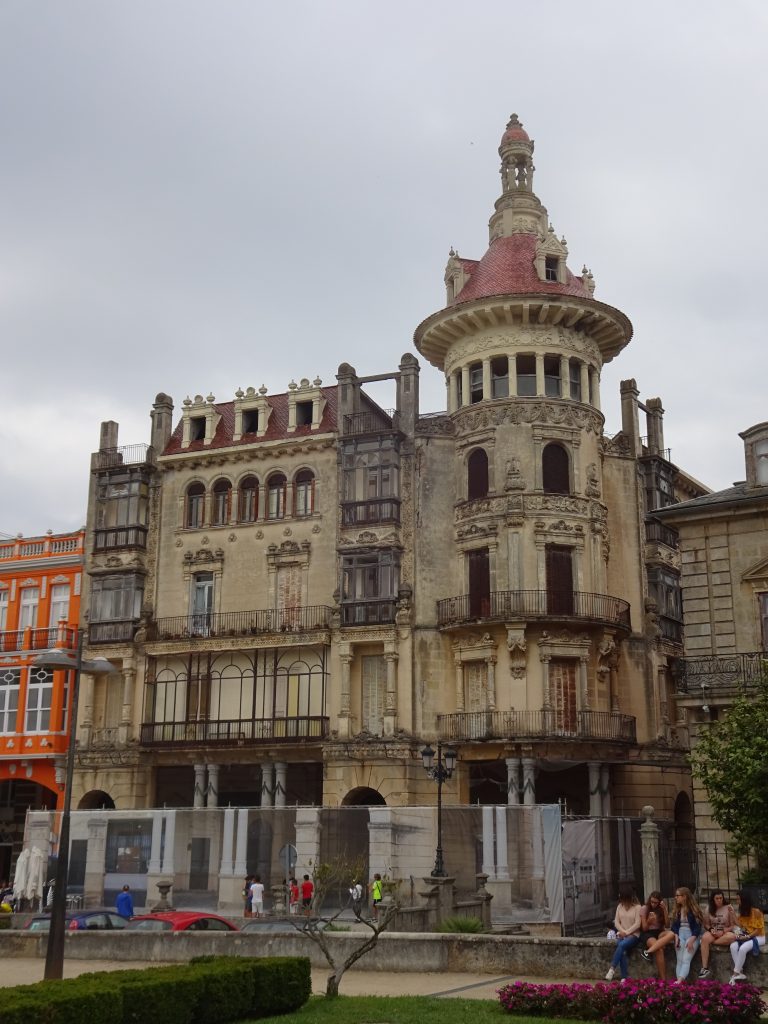 The old library – from days when remote parts of Spain valued such things. Awaiting restoration.

One of the great things about visiting places by boat is that the charts and pilot guide are functional and don’t help you gain an impression. Places are just dots on the map. Even the popular guides (such as Dorling Kindersley) cannot prepare you for the like of Gijon.

Gijon (pron Hee-Hon) is from another world. The habitation is mainly 4-5 story blocks of many ages. Most seem not to have cars: and this begets a shopping culture consisting of a myriad of small, personal shops, fresh food markets, interesting places to visit.

We loved Gijon.We stayed extra to find out more:

The view from the pontoon. Note people a quarter in on the left

Gijon is a “happening place” in the photo above you can see a miasma of people to the left of the white marina office. 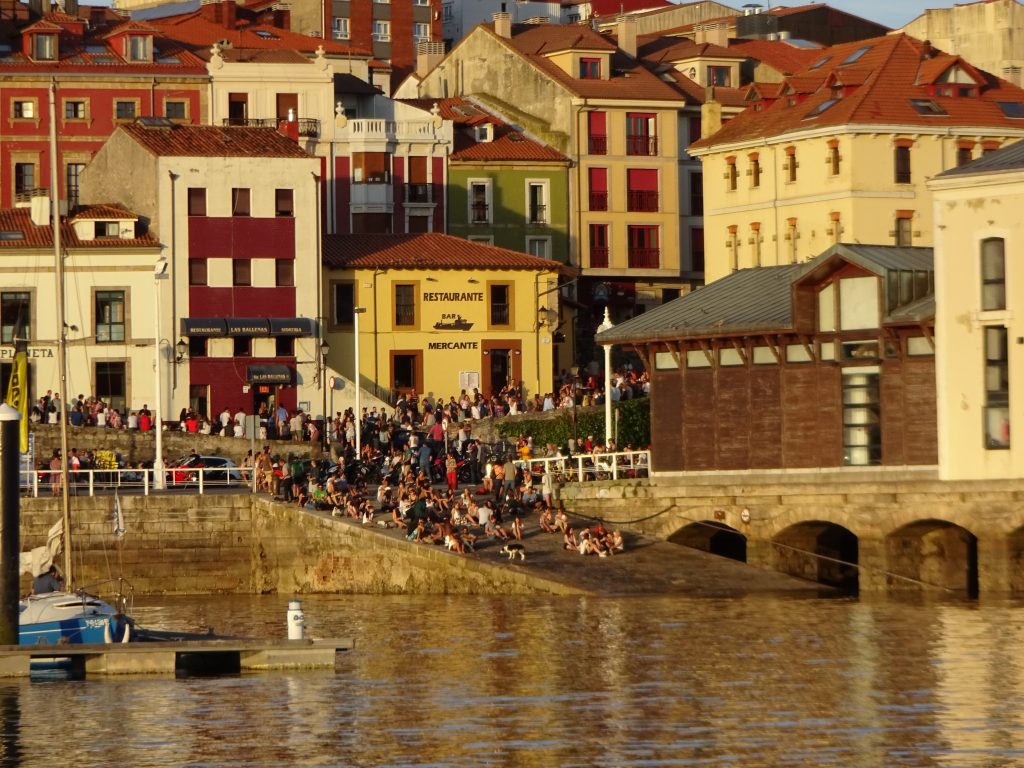 The noise,even on Filibuster, just said: loads of people chatting. And drinking…and drinking what?

Cider. They come here to enjoy a sunny evening, chat and drink local cider. Of which there is plenty. 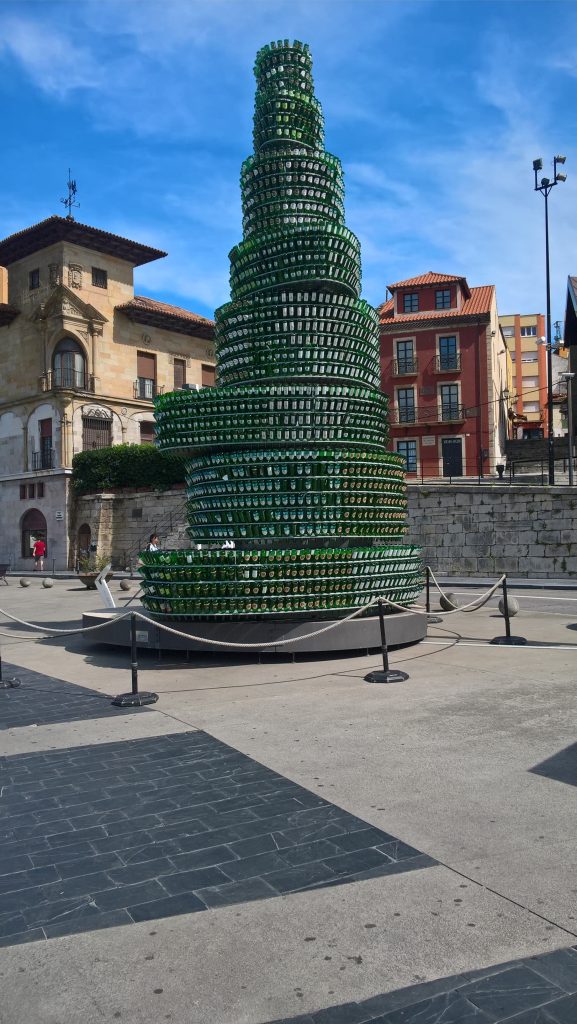 A Cider bottle tree. 3200 bottles were killed to make this…probably took the locals a night or two…

Gijon is full of it. Interesting older buidlings that survived the civil war (and Gijon has a past in that). heres’ a few we saw: 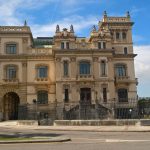 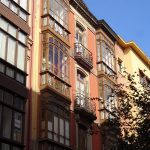 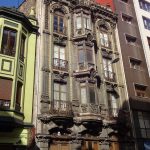 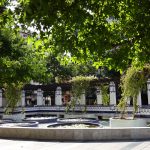 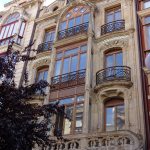 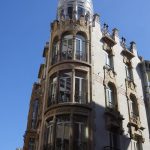 There’s many more and it all helps to create a fascinating visual environment.

There’s a lot of it about. Take a look at these two aerial photos of the port. The visitors pontoons are on the left:

The Royal Caribbean (owners of huge cruise ships such as Navigator of the Seas)  photo has been modified thus:

Closer inspection of the Royal Caribbean image shows further modification, and if this one shot has been neavily modified then, by assocation the rest of their web site is likely to have been as well.

Such is promotional material. There’s no rule saying it has to be true and clearly Royal Caribbean know that.

One more knock on RC. On one of their cruises they’ve invented a new port called Paris- Le Havre. That’s a bit like the new port Brimingham-Southampton I’ve just invented 🙂

Guidelines issued  as we are away suggest we should all take a brisk walk regularly. Take a look at this: 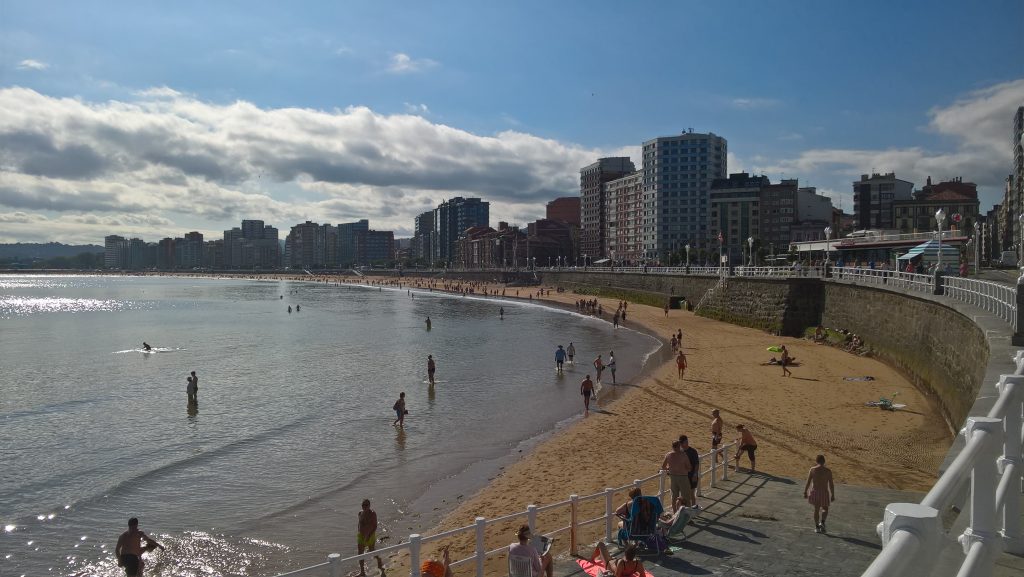 Taken at 1045 am. The vast, vast, majority of people on the beach were walking briskly. A healthy activity we have seen across much of Northern Spain

Gijon was a delight in every respect: go there.

Literally Sella River. Ambleside by the Sea. Mid way from Gijon and wherever next.

Start of where the Picos Europos get closer to the sea (the whole of N Spain seems to be like this: sea, a small strip of land upon which people can live, then mountains )

Ribasedella is one of those places that was previously just  port, but has a beach, and with new road access to the world is opened up.

It was dull and grey on our day, but I found these on the internet: 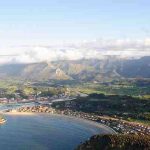 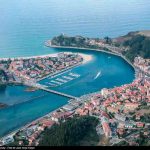 The first is on older shot, but shows the placement of town and mountains beyond well.

The second is more recent and shows the sheltered nature of the port, the entrance and the marina. The only info to add is that the long pontoon (running NE-SW in the second photo welcomes visitors).

The pilot guide is incorrect and probably deters many visitors: The long “transitos” pontoon has space for around 8 boats alongside with excellent shelter, water + electricity. The club that runs it are charming and friendly and lack of English, or your lack of Spanish is irrelevant. The facilities are there, are clean and in excellent order.

The normal transits otherwise are Santander and Gijon, a 65nm hop. Ribasedailla is perfectly placed half way.

I leave you with one other shot. Ribasedella has a supberb beach and along that beach live the rich and famous of Spain. Possibly including the Adams family. 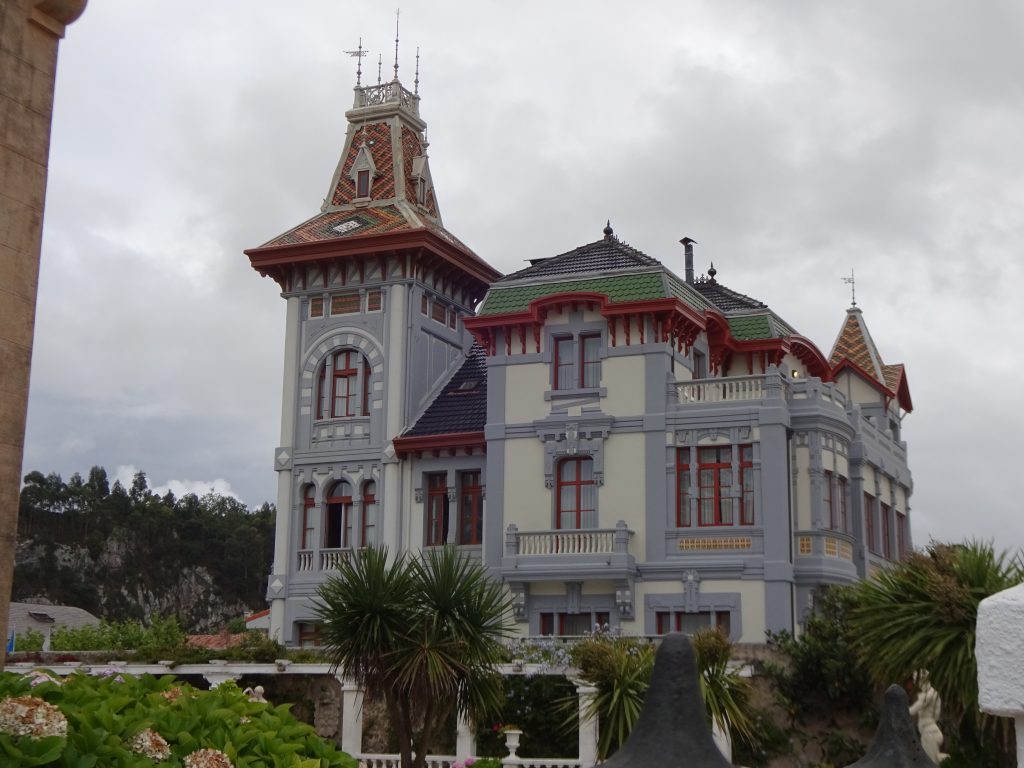 I’ll publish this now – brings me closer to actuality and not such a big post next time.