What do most people do on holiday?

Well it seems that on Le Belle Isle all of the above. It’s stuffed full of bars and eateries that are just right for people watching.

And when you get bored of that then why not hark back to your youth and do something you haven’t done for years?

Yes – hire a scooter. OK I have to admit to never having ridden a scooter in my life, being an ex member of the loud, proud and oily British Motorcycle Owners Club.

Belle Isle is about 17km long and 3km wide: too much to walk but grease the palm of the local hire place (right on the quay) with about fifty squids and you have a trusty Honda 110cc scooter for the day. 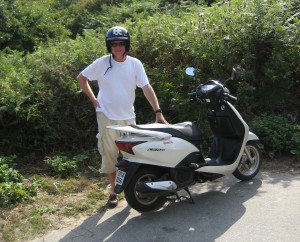 The last time I rode a motorcycle was in 1984 – a different epoch. Perhaps my reactions were faster in those days but wobbling along with trusty wife on trusty steed was a whole new experience. 30mph has never seemed so scary….

…at one stage we even reached 50mph! But trusty wife on the back of trusty steed bottled out at this pace and requested something a bit slower. We settled on island buzzing at around 40mph…..

We buzzed to the South – the tiny beach at Locmaria overlooked by ancient manor house: 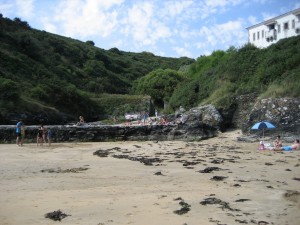 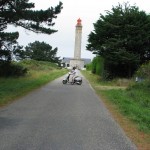 easy rider with a lighthouse

We buzzed to the West: Le Phare Goulpar: one of France’s premier league lighthouses

We roared to the north – don’t park your boat here: 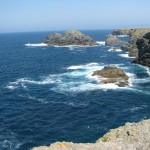 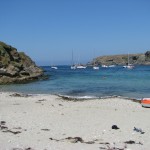 Ster Wenn on a nice day

But here is supposedly safe – not far away at Ster Wenn on the NW cost. Apparently exposed to a NW swell, which was indeed running that day and the boats at anchor looked very uncomfortable. 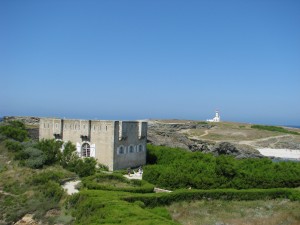 (she got so tee’d of with hangers-on visiting her that she had a new place built for them, the roof of which happened to be a great place to take this photo)

And our last stop was beautiful Sauzon: 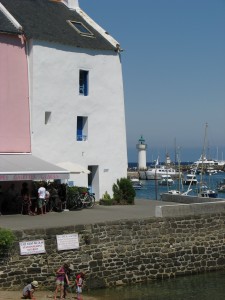 We would really like to get back to Sauzon: although just a few miles away from Le Palaise the pace of life was just so completely relaxed it could have been a different planet.

So there you have Le belle Isle

In less than a few words. it can be summed up as frenetic. It never stops, it’s noisy, it’s fun, the port is busy 24 hours a day, people buzz around on scooters and all sorts on small hire cars. It’s that kind of active holiday place.

Having completed this post after visiting Ile D’Yeu and chi chi St Martin on Ile de Re it’s worth waiting for the completed posts from those places as they are all very different kinds of islands.