They say New York, New York so beautiful they named it twice. (I’ve been there, I think they couldn’t think of much else to say).

But think of Le Palais, Belle Isle, an island off the west coast of France: now doesn’t that conjure up all sorts of imaginations. I’ve now been there as well and it is worth talking about.

But first let’s get the stressful bit of arrival over with:

“when will we ever learn, Le Palais is rapidly gaining an unenviable reputation as a place where not to park your boat. Many folk visit and vow never again!….

Ok, if you still insist, get there early, bring plenty of fenders and a king size sense of humour

”
Well we did insist. Our only other choice that day would have been Port Haliguen, a marina so vast, soulless and particularly unpleasant for visitors (eg nearly 1km walk to the loos) we care to avoid if at all possible.

So to Le Palais, Belle Isle with joy and anticipation – a new place for us. Arrived early as per instructions, fendered out to the max, mooring lines on every cleat ready to take on the challenge.

First unusual thing: they have 3x 3.1m ribs with 10HP engines. They buzz around the harbour, locating, directing, shoving, tugging and cajoling boats into spaces. They do this with a demonic verve because at peak times there’s an awful lot going on.

So a quick intro to the mooring system will set the scene.

This is how it goes:

One of the guys on ribs, let’s call him Mr McEnery, locates us and becomes our man:

Meanwhile McEnery has whizzed around the back to take our longest line, thread through chain and back to boat. We could be moored in a jiffy… mais il y a un probleme…

– “You ‘ave a longeur ligne?” dit McEnery, on account that a) our longest ligne is no longer long enough as we are now heading forward on account of my desire not to get too friendly with our yet to be neighbour’s home.

So we pause. Boat going forward, Michele holding on the bow, McEnery holding the not long enough ligne whilst I dig down in the locker for another bit of not used very recently rope.

With not used very recently bit of rope now tied on and other end delivered to McEnry on his rib now simultaneously holding shorter than needed warp, standing in rib with power on preventing us meeting soon to be neighbour sooner than needed, smoking a gauloise, steering with foot AND on the phone, tying both bits of rope together.

And then we are there…attached…nous sommes arrives. relax

A McEnery. Note absolute regard for personal safety…

McEnery buzzes off to deal with the next crisis. Adrenalin levels reduce. We are fully attached in our own bit of water in an interesting harbour overlooked by Le Palais and the Citadel. Nice.

So armed with a nice cuppa and reducing adrenalin levels we decided to sit back, take in the scenery and watch what happens to other boats.

First of all remember the 8 inner buoys, now with with a couple of boats on each and, in  my mind, looking a bit full. A bit short of space.

How wrong can one be?

First of all the “ram them in tactic” gets used. This is where boats are encouraged to drive on and “open a space”. Everyone on board a stationary boats sees a new neighbour coming in, grabs and pushes against them as they arrive. Self preservation again avoids le crunch and magically opens a new boat sized space for new neighbour.

All in good humour because that’s how it’s done.

Secondly, after the “ram them in” tactic has resulted in no more obvious boat sized gaps left, McEnery and mates reappear and use their ribs to push boats apart. More spaces open up and instantly get filled with boat.

Finally, when the number of boats crammed in = space available less 1x fag packet each, the place is full. Really full. A new commune of boat people forms, fenders squeak, fenders groan, and  everyone is cordial and happy because we 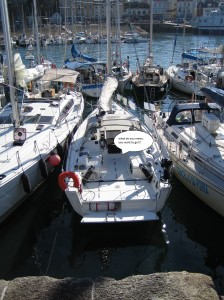 With the outer row of buoys also now full that’s it. The poor souls on the inside are not going anywhere.

So what else goes on?

It’s a bit hypnotic really: across the fairway the McEnrys do the same for smaller boats.

Ferrys come and go with astonishing regularity. The whole harbour is hyper.

Late arrivals get turned away (nous sommes desole, mais nous sommes plein!)…= you should have got here earlier

Peace at last.
The view over to the quay wall. Ramparts of La Citadelle on the left. Filibuster somewhere in the middle.

Enough of the mechanics of hi stress boat parking, the next post will cover what we did on Belle Isle.

View all posts by Martin
The Naked Sailor →
← Loctudy