L’Herbaudiere and Francois the Forgetful fisherman

Home } Ports and Places } L’Herbaudiere and Francois the Forgetful fisherman

Well here we are (or were) in L’Herbaudiere on the tip of a small island to the South of Nantes. It’s our first stop after escaping Arzal.

Note whitewashed houses and clay roof tiles signalling warm and sunny, which is exactly what it is. 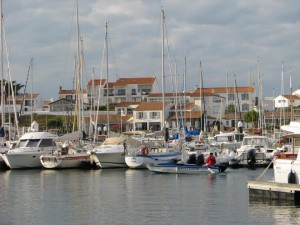 Now we don’t really like this place too much and Michele would have me spend 3 more hours travelling to avoid it, but it is bang on our route and anywhere else isn’t.

So why don’t we like it I hear you ask in unison. Is it the local facilities? Non. The services du port? Non. Then what?

It is the fact that 1) it is a bit popular (also on everyone else’s route) 2) you end up rafted out into the main fairway and 3) worst of all the local fishermen are a bit anti people enjoying holidays in yachts.

They take particular delight in fishing into the night and passing very fast and very close to rafted boats and their sleeping content. The resultant crash-bang-slap of the associated wake wakes everyone up and there is a joint low mutter of bastardo, or the French equivalent, as we all curse passing fishing boat.

Which leads me to the story of Francois the Forgetful:

Francois had being having a hard time – he had been courteous to sleeping yachtspeople by passing carefully and slowly, especially at night.

Sadly Francois’s boss was a bit anti yacht and warned him “if you don’t give them a hard time I’m going to give you a hard time and the sack. Let’s see you in action tomorrow 8am prompt”

Francois’s girl Francine was also giving him a hard time – “work harder and earn more money” she argued with him that morning.

So, eager to please both irate girl and irate boss, Francois put on his best blue top and went off to work: but the prospect of taking it out on the yachties troubled him.

Late for work following the contremps with Francine, Francois raced off in his silver Peugot, Pierre. He parked on the quay wall, but being late his regular slot of 51a was occupied, so he parked next door in 51b (more later), leapt out and off to his boat….bad move Francois…

…. about 30 seconds later an enormous crash follows as his trusty Pierre fell off the harbour wall. Francois the forgetful had forgotten to put the handbrake on….oooops

Of course all this in direct view of the aforementioned sleep deprived yachties now having a good serving of trog watching with their breakfast.

The old Irish trick? I’m sure you’ve all seen the mockup of 2 mobile cranes falling into an Irish Harbour to recover a car – I say mockup because only one fell in. This is how the French recovered Francois’s car: 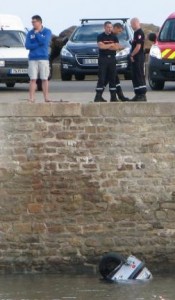 1)      Bring in the sapeur-pompiers to investigate. Note Pierre’s in his best blue top pointing to 51b and final path of Pierre the Peugot. 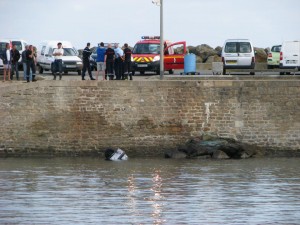 I parked it over there in 51b, Francois explains. Note gap through which Pierre rolled. 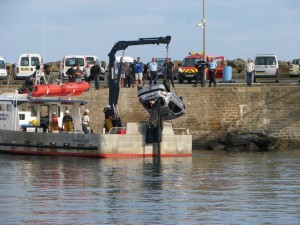 crane in the water, French style 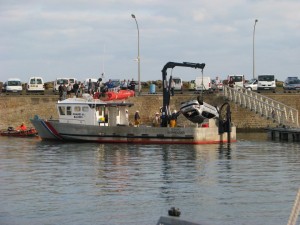 good job we was ‘ere guv, wasn’t it 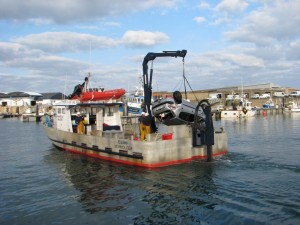 The whole process lasted no more than 20 minutes.

Poor Francois, or whoever “the forgetful” one was.

And the moral of the story. Don’t annoy the yachties because they have ways and means of having the last laugh 🙂

PS This is a true story….well part of it is….and all names have been changed to protect the true identity of the unlucky Peugot driver.