Here we are in Pornic. A stylish place if ever there was one.

The houses and grounds along of the estuary to the old port reek of having had a lot of money applied to them over a long period of time. If you remember the film “Dirty Rotten Scoundrels” with Michael Caine and Steve Martin then it’s that sort of ambience.

Panorama looking away from the marina along the west bank. The coast path wends it way right into town in a delightful 15minute stroll

panorama looking out from the drying harbour. The marina wall can just be made out in the distance

And its the 1st September and pleasantly warm and sunny as our new instrument confirms. 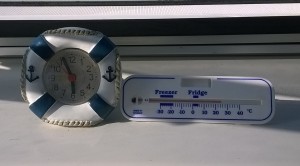 And it’s the first day of Michele’s retirement. More on that later but first a word or two about the bottom and how close it gets to the surface.

In Filibuster it’s never less than 2m. Or so you would have thought. Negative draught is not recommended in the manual. 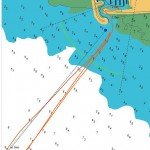 And of course when you are on a boat as long as we have been this time round (5 weeks now) you are bound to come across days when the place you want to go to, the time you arrive and the tide are at odds with the 2m or more rule.

Like Bourgenay on the 27th August : the chart shows 0.7m minimum but the channel is supposedly 1m- added to lowest tide of 1.2m should be OK. but with swell running and an unfortunate arrival time discretion delayed arrival in favour of some pootling. (See chart) 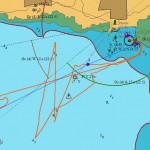 Like Pornic.  Arriving much earlier than expected due to very favourable sailing conditions. We approached….very slowly…we stirred some sand, we retreated and did some more pootling. In fact quite a bit as this chart shows….

Don’t get the idea we make a habit of testing the bottom, but there is always something delicious about getting into port or up river on a rising tide 🙂 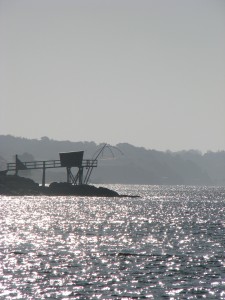 So here we are on the 1st September in Pornic. 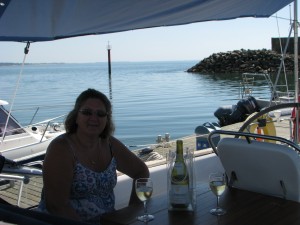 The season has finished and Michele has retired. 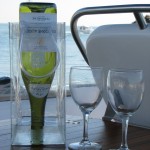 and even later we found out that every restaurant around the port had closed down except the one where the local fishermen were making a really professional job of getting obliterated celebrating the end of season. I say professional since they had been at it for over 24 hours.

– this is Michele anthropomorphising again

CHINKY-BOO – yes that is its real name – made by the eponymous Chinky Boo Corporation of China is an ice maker and it produces 9 hollow ice cubes every 8 to 9 minutes.

It has been marvelous and also allowed us to have G & Ts with ice for the first time ever on board.

This leads onto the other piece of equipment purchased this year – a proper device to keep white wine cool into which we put Chinkyboo’s ice cubes (ed: as well as the bottle of wine ). Result happiness !!!!!!!!!!!