Well I’ve already written plenty about St Martin and this year it looks like the turning point of the journey again so I’ll write a bit more.

Already we are in Port Joinville, heading North. Dodging bad weather (again) so the 4 fine days Zoe was with us become a memory.

But First: And the crowd applauded

So we arrive in St Martin. A slightly longer journey via half way to St Dennis, Ile D’Oleron, re routed due to slightly tender nature of daughter’s stomach when subjected to windier than expected windy sailing.

The harbour is a bit full, but not full. The harbour master asks how long we want to stay: 1 semaine. Hmmm he goes. He wants us nicely parked and not having to move every day to let other boats out. He wants us alongside the pontoon and we want to be there as well.

But V2 boat is leaving later and he tells them to shove off to another part of the marina, thereby creating the desired pontoon space.

Great, you might think. Except that the now ex V2 boat wasn’t that big and the space left doesn’t look Filibuster sized.

Harbour Master asks our size: 12.5m. He paces out the gap: 14 paces.  “Ici – c’est bon pour vous”. Glug thinks me on the basis that his measurement device isn’t very accurate and even if it was, that leaves me with placing Filibuster sideways into a canyon, 3 boats rafted either side.

Leaving 3/4 of a pace fore and aft. Did I mention it’s windy? Have I ever mentioned we don’t have a bow thruster? And I probably don’t need to remind anyone that sailing yachts can be particularly truculent beasts when made to go sideways slowly.

We get one chance at this. It’s High Noon at the OK Chapparal. The crews on the boats lining the canyon are armed and ready. We make ready. The wind blows. Tumbleweed rolls down the fairway. The wind whistles. etc.

All eyes on us because this could go so badly wrong. We commit.

Now before I come to the outcome let me tell you about a fantastic French word called “doucement”.  I learnt it in L’Aberwrach. It’s a lovely word and pertains to the art of doing things “lightly”. In L’Aberwrach it was used by a French lady against a gung ho incompetent trying to park his boat in a tight spot. He failed. Using everything his engine had he went backward and forward, crunching French lady’s boat and eventually running aground. He was not Mr Doucement.

We are committed. Filibuster is in the canyon. No way back now. With less than 2ft space either end to play with a lot of doucement is used. Forward a bit, backward a bit, let the wind take her in a bit. Repeat.

Then a line goes ashore and is made fast. We are in. Touchdown. A perfect landing: 10/10.

I really can’t remember much about it, except that at the end the crowd applauded. “Un belle manoeuvre” a new neighbour says.

The rest of the canyon filled so quickly I didn’t even get time to get a photo.

And the rest of the stay?

We cycled up to the unfortunately named Ars. If someone were to ask where we were going I could have replied “the ars end of the island” and be perfectly correct.

We had a party with our new neighbours, one of whom owns his own vineyard and contributed wine from his special selection 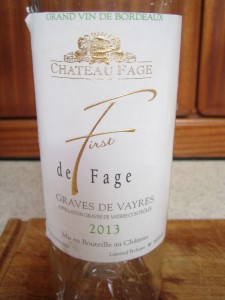 And on the final day we made Zoe eat Oysters in the afternoon, drink some fine wine and finish with Lobster Thermidor for dinner. 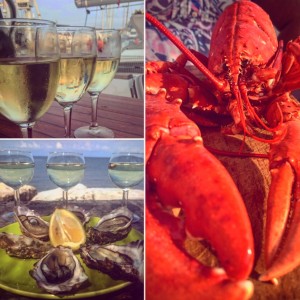 The lobster came from the market 200m away. He was hiding in the tank trying not to make eye contact….