One of the nice things about cruising is that you often have no idea what’s going on in a port until you get there.

Les Minimes in La Rochelle is no different: We find ourselves right in the thick of the World 470 Championships.

This means that there’s a lot of 470’s around and at this early stage GBR is well placed in both mens and womens events – more if you read this post from the 470 people.

It also provides a few opportunities for nice photos to pass on: 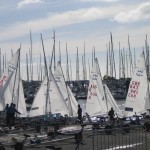 The electro taxi boat was making a great attempt to get honours: 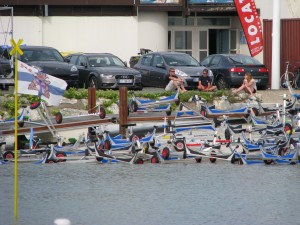 anyone seen my trolley? – it’s blue with black and red wheels