Downtown St Martin, taken from the top of the church tower (click for hi res image)

After the hurly burly of La Rochelle we headed to St Martin-en-Re, Ile D’Re. 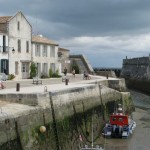 Looking outward to the narrow entrance. Note lifeboat on mud

Access is High water +/- 3 hours- plenty of time after we left La Rochelle at dawn just 12 miles away.

St Martin was a heavily fortified town whose sea access is narrow: just about enough for one boat in either direction. Access to the marina is controlled by a lock and overhead gate.

You arrive at the right sort of time to find:

a) all the boats who are leaving on that tide do so in a long procession – so it’s dodge the outgoing stream of boats as best you can: They have nowhere to go but out and that’s where they are going.

b) after passing through the narrow entrance into the avant (outer) port you find all your new mates hanging around waiting to go in – in our case about 6 or so other boats waiting for the green light.

c) the green light comes on: boats are directed to come in one at a time, unless you are Filibuster and not knowing the process –  we decided to make it happen and went in first.

d) you are told where to raft, because raft you will as there is little space left for any other form of parking. You will be put alongside something of around the same size.

And so the place starts to fill. And from nowhere another dozen boats appear. All wanting in.

But the Harbourmaster (AKA Master of Ceremonies) has seen it all before.

One at a time: you over there, next boat over here and so on. Everything neat and tidy until there’s no more room.

In our case we ended up 3rd out on raft v2. By the time it all finished we had another 3 boats attached.

4 new arrivals, 3 existing.About the same behind, about the same in front. So all in all say 20 boats in a space about 20 boats big. 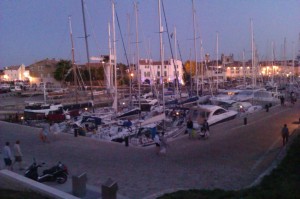 So, the boats on our inside have clearly been in St Martin longer than we, and in all probability will depart soon than we do. And that’s just what happens on the next session.

With so many trog watchers (this is after all a spectator sport) no one wants to get it wrong. We all talk: English/English, French/French, Franglais/Franglais. And the Brits have a pre-match huddle: after all we are superior sailors and can’t let the side down on an away game.

We all work out the who’s who: who on the outside is going, who is staying. Who on the inside needs surrounding neighbours to move to enable their exit. By the time the lock gate opens everyone has a sort of game plan, temporary shore lines are made, Electricity disconnected. Exit ways primed.

And then it starts: boats peel off and leave, boats head townward and lurk until their space is re-created, boats go sideways to enter exit ways that have just appeared. It’s solitaire on a big scale.

Those with bow thrusters use them and superior sailors don’t.

And one by one the melee expands, inner boats leave, boats on the outside move inward to fill the space. Stayers settle back and await the new arrivals.

All done with the most convivial attitude: everyone helps to make space, tug, push and manoevure in the friendliest and most helpful way possible. A nudge here, rev of engine there.

This helps: arrive on the right. We parked on the longer raft of boats at the top. The lower right harbour dries.

Can’t be far off: very high on our rate-a-marina scale for:

– good facilities and not too expensive

– great food (both at restaurants and markets)

A must see place to go to and go back again too.

Enough of boaty stuff: you all want to know about St Martin don’t you? and that will indeed be the next installment.