Ile d’Groix. Let’s put it context for you: About 4 miles long by 1.5 miles wide… 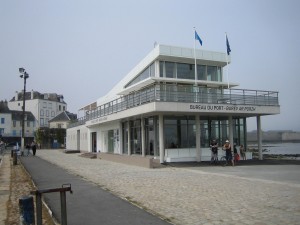 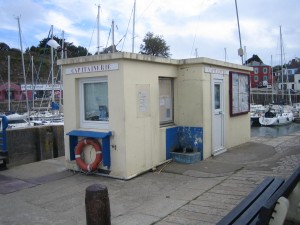 This one does a similar job on Ile d’Groix

It’s not surprising that Ile d’Groix is a top spot for visiting boats from nearby. And not so nearby.

It’s full. Fuller than full. Not enough capacity, of water, of marina, of electrics. 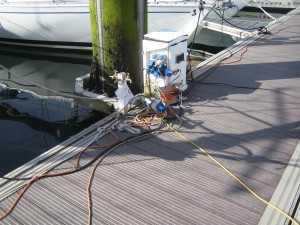 The Rhythm of the port

Did I mention the ferry bit? That takes up a lot of space.

Did I mention it’s always full? Even late June. It’s full and the workings go thus:

Turn up in the afternoon and you might get somewhere to stay in the outer port on the fore and aft buoys. Not so bad as long as you have a dinghy. Nice views. Not so manic.

Except when the ferry does a 180 turn, and uses your boat as a guide. 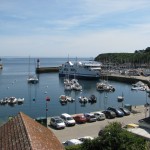 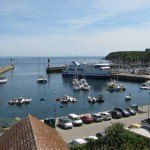 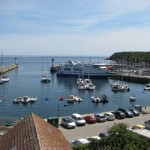 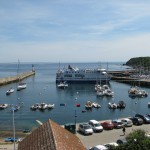 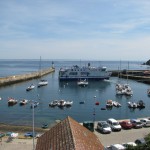 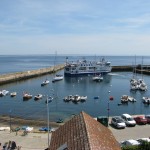 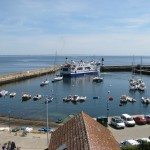 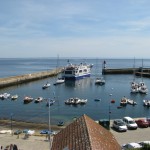 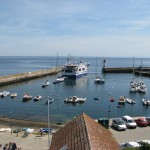 he gets this close: 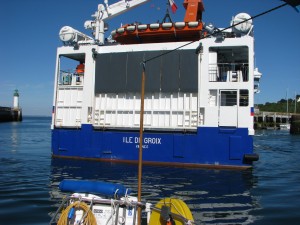 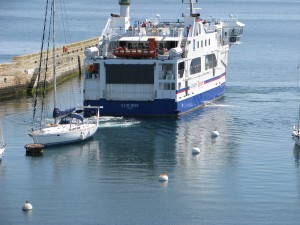 The close up photo taken whilst we were on the outer pair of buoys above. eek.

Next morn you watch for boats coming out of the marina so you can get a top spot space in the marina-hammerhead-outerbouy pecking order. And we did.

So that’s the rhythm.

We arrived. Newbies. No space for a 40ft-er inside so troll out to pick up a fore-and-aft.

It’s sunny. Warm, about one o’clock. We get out the “clacker”, a special device that allows us to quickly hook onto ring topped buoys. Before clack-and-attach happens a voice rings out

Ssszzzsss!!. We’re 200 miles south of home. No-one knows us here…but someone calls my name, in my direction, not a French Martin call, but an English Martin call. Someone knows us and wants to say hello.

A look around. It’s Stephen Lenister and the Topsail gang (see here). Joy fills our hearts: friends . Friends culturally, linguistically and all those things that herald a good meeting with like minded, enjoyable people.

We go alongside. Hail friends well met. And the scene is set for another nice meal – 8 all told at the Blue Thon up the hill. Warm. Outside. Seafood . Heaven.

And So to Ile de Groix.

The Capitainerie, the electrics, the rhythm of the port: it all settles you into life-a-Groix.

An enveloping calm. Life is relaxed here at this slightly out of season time. Not frenetic like the larger islands can be in season.

Port Tudy tries, with the obligatory port side bars, restaurants and marine style shops. But the next layer beyond the port is just calmness. 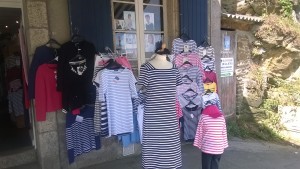 Many years ago: Pierre and Florence, at home on Le Bourg, the largest of the villages on Groix and close to Port Tidy (the port we are in).

Pierre says to Florence. “Florence dear, I’m just off to the shops”. He goes. He doesn’t come back. And all over the island appears to be this evidence of many Pierres doing the same. 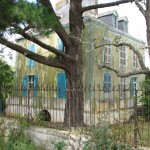 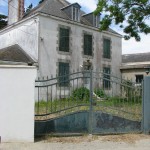 Fields seem to have been abandoned to nature.

What happened? Could it have been linked to WWII when this part of the world suffered dreadfully?

I’m pleased to report that many Pierres, or their offspring , are returning and there is clear evidence of renovation.

And you can’t get lost due to the many Groix-esque road signs. 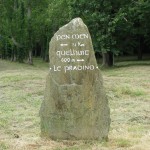 And as befits this friendly quiet island you get taken around a place devoid of traffic, devoid of modern signage, devoid of hectic activity that the ride is an absolute pleasure. 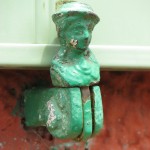 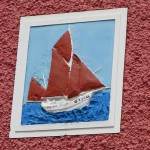 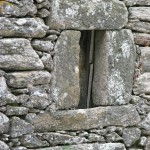 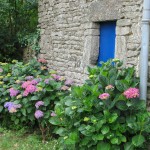 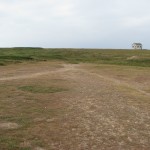 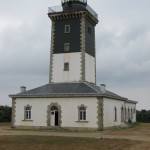 And the smells. Of wild flowers, honeysuckle, broom, blackcurrant, of nature. Everywhere. In fields that are no longer productive.

And even the wildlife are friendly; 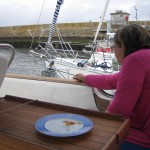 Got any bread, I’ve a familiy to feed 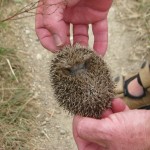 P*ss off. I was having a sleep. (in the middle of the track)

Apologies if Groix is a ramble. So much to say for such a tiny place. I just hope I’ve encapsulated some of the ambience of the place.

We’ve been to most of the Islands lying off the West Coast of France, but Ile d’Groix ranks high in the list. Different again from all the others. Not over exuberant…not over developed (yet), friendly, laid back.

And yes, we will return. 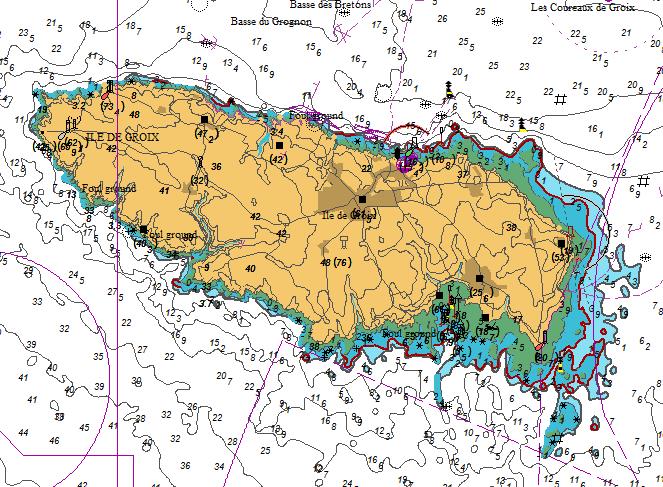 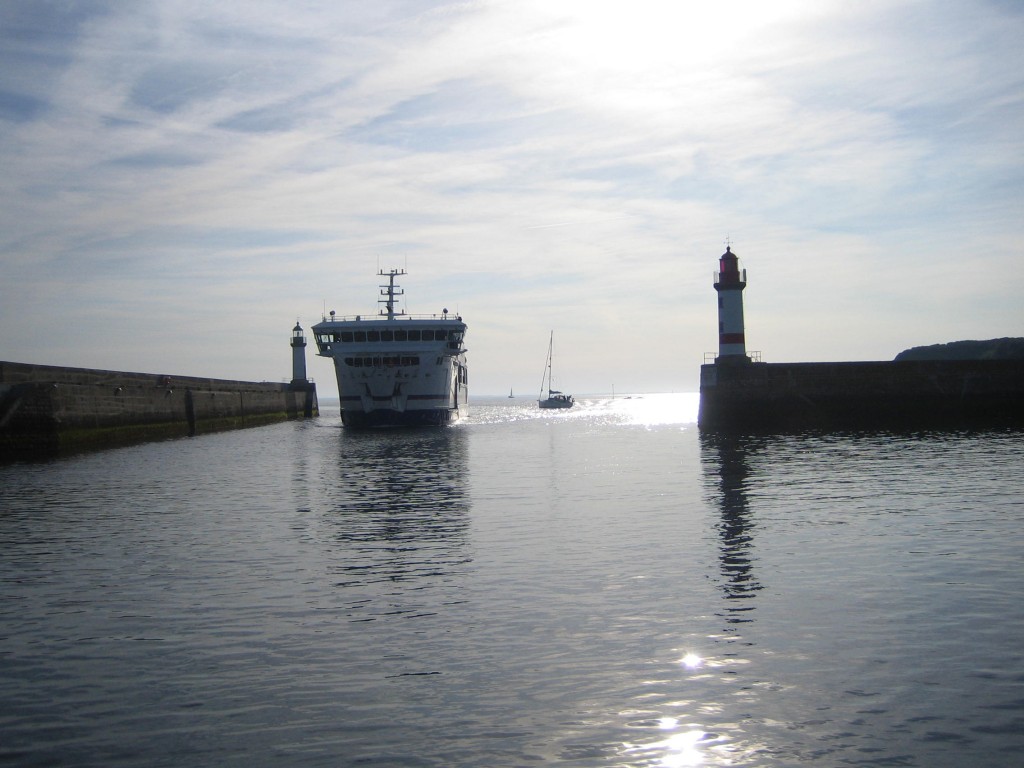 Ferry coming in. Tops’l going out

View all posts by admin
And so to Sauzon →
← So Houat